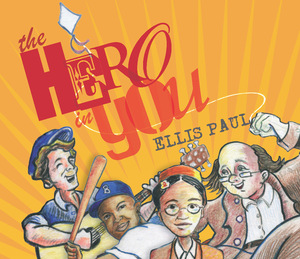 A review of "The Hero in You" by Arthur Wood of the esteemed Maverick Magazine, to be out in the UK in the May/June issue:

Ellis Paul
THE HERO IN YOU
Black Wolf Records

And you can be a
hero too, too, too

Ellis Paul’s first foray into children’s music DRAGONFLY RACES (2008)—it also worked for adults—picked up a Parents’ Choice Award Silver Medallion. I predict even greater success for his sophomore THE HERO IN YOU.  [Management note: Arthur predicted correctly! "The Hero in You" is a Parents' Choice Award Gold Medallion Winner!!]

During the 1970s, as a teenager growing up in Maine, Paul recalls with fondness the pioneering Saturday morning ABC television children’s series Schoolhouse Rock! Employing animated musical shorts, the show covered a broad range of educational subjects. THE HERO IN YOU follows in those footsteps and paints portraits of men and women who made a significant impact on American life. By way of reference, I’ll include the dates of their birth/death.

Sound effects, pretty much throughout, allow the listener, young and old, to engage with the subject matter in each song, while the contributing players include album producer Flynn (electric & acoustic guitar, keyboards, loops, vocals), Michael Clem (bass, mandola, vocals) and Ellis’ young daughters.
«12345

Feature Articles - The Day After Everything Changed

Fan Reviews of "The Day After Everything Changed