Aug 10 2017: New England Songwriters Retreat deadline and Texas in August? Am I crazy?! 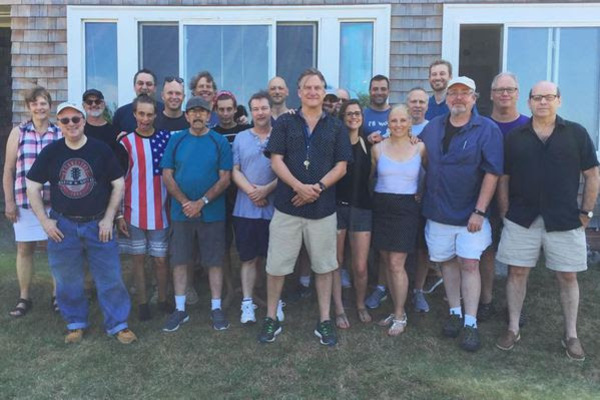 I just landed in Dallas for a run of shows in Texas-- check them out below-- the two anchor shows of the weekend are in Austin and Dallas. In Austin I am playing the Winflo Listening Room for the first time. Everyone has been raving about the food and the sound here, so bring an appetite and both ears! Saturday, August 5th at 5pm I roll into Poor David's Pub in Dallas for the first time in ages. Last time I played here Shaun Mullins opened the show just before his hit "Rockabye" was released. It's a legendary Dallas venue and there ain't a bad seat in the room.

Shows in Canada and New England coming up, Maryland as well to round out the month! Check out the dates below!

In just two weeks I will be hosting a group that includes some of my very favorite songwriters at a historic Inn in Chester, CT for the Second Annual New England Songwriters Retreat. It's an intensive weekend gathering of community, knowledge, songs. I want to explain to you why I think it's important.

Firstly, if you are a songwriter, I hope you'll join us-- click here for more information.

When I started playing as a young artist in the 1980's there wasn't an opportunity to do something like a Songwriters' retreat for musicians. If there was, it would've been completely life changing. At the time, I would travel on a weekly basis around Greater Boston on the open mic circuit, sometimes as much as three or four times a week and meet up with a rag tag group of songwriters doing the very same thing I was-- Playing at home and writing songs in my kitchen. Vance Gilbert, The Story, Dar Williams, Martin Sexton, Patty Griffin and many, many more would be there trying material out for the first time.  The camaraderie and competition amongst us eventually expanded our talents over the course of those few years, but having only a song or two on stage made the lessons often too brief to expand our art that much each night.

So we'd buy tickets and attend shows by our favorite headlining national acts-- John Gorka, Bill Morrissey, Cheryl Wheeler, Patty Larkin. We'd take notes as students of the craft on how they presented themselves, their songs, their banter. Most of them were working too much within their own careers to give more than a brief snippet of knowledge or encouragement to me. But when they did, it was priceless. And it kept me going.

I was lucky to have extended time with Bill Morrissey who produced my first album, and provided me with feedback on the songs and stagecraft needed to keep an audience focused and rolling through the flow of a performance. He sent my ears wandering deeply into his album collections, and his life as an artist was both educational and an inspiration. We all wanted to be him. He taught me how.

If you were lucky to get the opening slot at Club Passim for a weekend you would play six half hour sets over three days and get to hang out with and watch the masters perform. You'd get a glimpse of the secret keys of a headliner's show. This was an immersion in watching a performer-- a ten hour class and even more if you could get hang time with them in the green room or over a beer in the dark corner of Grendel's bar in Harvard Square. This was graduate school. After a weekend watching six shows by the same artist you would slightly walk like them, talk like them, perform like them. It would be weeks before you shook them out of your system. The parts of their craft that worked best with yours remained forever. That was immersion. I felt the arc of my own evolution from folksinger/caveman to homo sapien from the Friday to the Monday.

However-- these open mics, these headliner shows, this "picking the brains of masters" literally took ALL of my twenties. Years. And this is  where the beauty of an immersive retreat comes to mind. The instructors are here all weekend. They perform for you, listen to you, teach whatever fragments they have that will become part of you. They commune with you-- hear your questions, share meals and shows and your concerns.  You soak up their advice while making friends with a gathering of like minded souls who just want to get better. And hear you.

This is why I've created the event. To speed along time in an artist's learning curve. Most of you know I've mentored many artists over the years-- for free and professionally. There's no real school for folk music. I want this to be a stepping stone for people.

The staff includes people like me; Dan Bern, Vance Gilbert, Laurie MacAllister, Abbie Gardner, George Wurzbach, Molly Venter, Ralph Jaccodine and Brittany Bethune. I don't know all the numbers of these folks, but I've personally done over five thousand shows. Written 500 songs. Produced twenty albums. I've had the opportunity to successfully write for movies, tv, ads, other artists, kids songs, holiday songs, and random songs for hire. And I've run a cottage business and built a team around it that has paid the bills for 25 years. The combined experience of all of us is ten fold of this.

Dan Bern is a sensational songwriter/performer who has been on the circuit for three decades. He is currently supplying songs to a tv show and has also had his work appear in movies. He is biting, wise, funny.

Abbie Gardner is both a solo artist and a member of the trio of Americana darlings "Red Molly". She plays a melodic dobro and sings like an angel. She has written beautiful songs and deeply understands harmony,  stage craft, and orchestration.

Vance Gilbert is gifted at comedy, vocals, performance and songwriting. He's a force of nature!

Laurie MacAllister and Molly Venter are also members of Red Molly, and have run a business for a decade of shows and album projects. They are master songwriters, singers, and harmonizers and can provide insights on how to lift your business off the ground.

George Wurzbauch teaches music at the University level and has been a member of the touring act Modern Man for a decade. He can refine your chord choices, suggest melody changes and give you orchestration suggestions for your guitar or piano.

Ralph Jaccodine and Brittany Bethune run a management company that has worked with dozens of highly respected award winning artists for over twenty five years. Their insights into the building of a career in the modern music business will help streamline your choices and improve what you focus your time on.

This is a very unique selection award winning instructors!

I hope you join us! There are only a few rooms remaining, though commuters are welcome!

Click the link above to see the Retreat site!