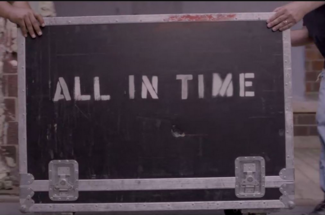 I wrote a song for a new film called "All in Time"! All in Time, an independent film starring Sean Modica, Vanessa Ray, Lynn Cohen, and Rob Bartlett has been completed and will debuting on the 2015 film festival circuit with a commercial release planned for 2016.  The film tells the story of a man who gives up his highly successful career in NYC as a banker to follow his dream of managing The Damnsels, his favorite rock band.   Ellis Paul contributed his music to the project providing The Damnsels with one their hit songs.