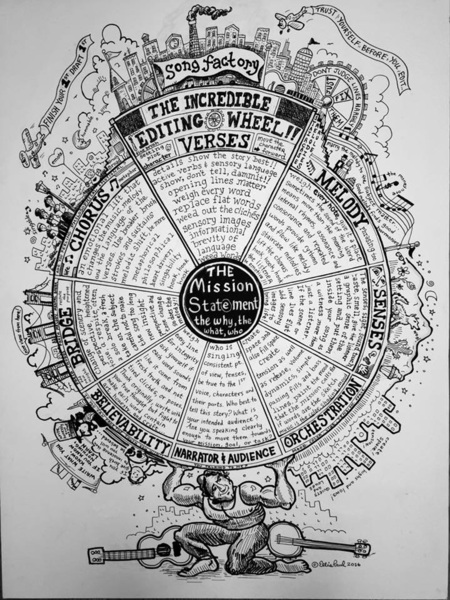 This summer has been a whirlwind for me-- with lots shows and teaching camps and illustrating. I get to do everything I love, which makes the clocks blur and the days spin, but in a joyful way. I'm in a beautiful part of the world, so even a glance out the window tends to give me a breathe of stillness.

I am thrilled about the First Annual Songwriting Retreat on Cape Cod this week-- I'm preparing teaching tools and we are collectively adjusting the schedule so that we are both engaging and not overwhelming. I want it to feel like a working vacation for the artists and for them to feel energized and recommitted to their work when they return home from the place. They will have new friends, created new ideas, written a new song or two, and most importantly have renewed enthusiasm for this kind of work.

See the editing wheel for an example of the teaching process!

We already have among us people who are just starting to write, all the way up to professional musicians who have been on the road for decades. New artists bring innocence, enthusiasm and a fresh perspective and disrespect for rules and practical approaches. The seasoned among us bring wisdom, experience, and a sageness that can help speed the curve of our learning process. It's a fantastic combination.

Ellis Paul-- that's me. I've been writing for thirty years. Been a full time touring musician for twenty five. I write story songs, with a romantic edge. They tend to be visual and lyric driven. My music has broad dynamic changes in volume and melody, because of the range of the vocals and the influence of rock and pop. I studied writing in college. Because of the nature of the lyric and the content, I feel more comfortable calling myself a contemporary folk artist. I've got some Boston Music Awards, an honorary PH.D. And a bunch of road miles kicking me forward. I've written for movies, tv, children, holidays and country stars, as well as for my own career. My classes will be focused on the process of songs, the editing of songs, and the magic of the process.

Vance Gilbert is one of the brightest lights on the contemporary folk circuit. His talents have been called into play as an opening act for some of the biggest legends to hit the American stage-- Aretha Franklin, George Carlin, the Milk Carton Kids. His humor is engaging, riotous, side splitting. His songs have the quality of a shaman sitting at a piano in the Brill Building. His voice is clear angelic soaring--- his sense of humor is devilish, with a flight pattern of commentary in whatever direction it chooses. His stage craft is nuanced-- he uses the whole stage, his whole body, the whole room. He considered to be one of best performance instructors in the country. His classes will involve performance and the song itself.

John Davidson is a well loved host, an actor, musician, singer songwriter with decades of experience on every possible stage imaginable. He has hosted the Tonight Show one hundred times and numerous other tv shows, sung on Broadway, acted in movies, tv and stage. Along the way, his music developed to the point where he is now a touring singer songwriter, with a clear voice, solid guitar work and a lifetime of stories about the entertainment world. His broad experience as a performer is seemingly endless-- and now as a solo performer he will be presenting a class on his life and his experience of the stage.

Ralph Jaccodine will be presenting classes on the music industry. He is currently managing Liv Taylor, Eric Andersen, and myself as well as numerous other young talents. Ralph teaches business at Berklee College of Music. Ralph has had 25 years in the music industry working in every aspect-- clubs, management, mentoring, booking, publishing, labels, radio, tv and movies, social media. It's rare that a retreat offers a business component and I am thrilled he will be teaching and taking inquiries and questions from you.

The retreat is in Centerville, MA at the Craigville Retreat Center, just a short walk to the ocean beaches. It's a comfortable setting to dive in with your muse! But the deadline is now! Please go to www.ellispaul.com for info.

I've got a great run of upcoming shows as well! The instructor show on Aug 12th featuring Vance Gilbert and I at the Craigville Tabernale in Centerville, MA. August 19th in Charlottesville, VA at the Southern, and a run of shows with Dan Navarro at Rams Head in Annapolis on August 20th and Jammin' Java (two shows! 4 & 7pm) on Sunday August 21st.

Hope to see you out there!