To borrow a phrase from an old favorite tv show:

Thanks for the heads up.....we've been fans for years.
"once we're inside, it's a carnival ride" ~ ellis paul
paddy
Top

For quite a while, I thought Lucy was just MOR... And a a couple of years ago, I rediscovered her and now I think she has the purest voice I've ever heard.

I was in early with her connection to John Gorka.....Lucy and Shawn Colvin sang bgvox on John's early stuff...and Lucy often opened for John, back in the day. Just love her story, from music to mental health and back to music again. Thanks for the link, Herve....sounds great!!!

"once we're inside, it's a carnival ride" ~ ellis paul
paddy
Top

I have been a fan of Lucy's since she was on the bill the first night I saw EP at a "night of rising stars", back in 95!! Back then she used to joke about changing her name to Lucika Plansky!!

I do think her song writing is somewhat simple, and lots of songs sound the same but she pulls it off with her vocals. She was at SS a few weeks ago and it was absolutely one of the best sounding shows we ever had.

She is SO happy to be a mom and her latest CD reflects that.
"Embrace what you have in common, celebrate what sets you apart" Ellis Paul
Top

Saw Lucy Kaplansky last night at the Komedia, Brighton which is a lovely venue with cabaret style seating (they do serve food) although the turnout at approx 45 was somewhat disappointing.

We're lucky that she's starting touring the UK in the last year or so. Having adopted a little girl from China five years ago she, understandably, didn't travel too far away from home so now she comes over and does 4 or 5 dates on consecutive nights and goes home - she patently misses her daughter, Molly, when she is on the road.

We spoke to Lucy very briefly after the show, she was amazed that the last time we had seen her was at Stone Mountain in August!!

When she played 'Let it be' she said that she'd started doing it after she'd read a Beatles biography and learned than it was about Paul McCartney's mother. She said that whenever she plays it someone in the audience tells her that they had seen the Beatles live and when she asked if anyone had guess who put his hand up? Yep - Richard saw the Beatles live when he was about 12 years old!

A very enjoyable evening, nice surroundings in a laid back atmosphere.

Thanks for the report! Sounds like a lovely evening. It is pretty amazing that you saw Lucy just two months ago at Stone Mountain!

And Richard saw the Beatles live?

Great report! I saw the Beatles in concert, too, albeit on tv. (Ed Sullivan show)

Sounds like a wonderful evening with one of our old favorites.

We absolutely love Lucy around this house. Will never forget all the great shows Lucy used to play opening for and later joining John Gorka onstage at the Mucky Duck. Last time we saw her she was the headliner, maybe the Tractor in Seattle, and i got such a kick out her going on about a new leather jacket she wore.

The setlist is all over the map....awesome.

We first heard My Name Joe on the first Legacy release by Windham Hill. Love that song!

David Massengill (born in 1951 in Bristol, Tennessee) is an American folk singer/songwriter, guitar and appalachian dulcimer player. His best-known songs include "On The Road to Fairfax County," recorded by The Roches and by Joan Baez, "The Great American Dream," and "My Name Joe," about an illegal immigrant restaurant worker. For some years after he began recording, Massengill maintained a day job as a restaurant dishwasher
"once we're inside, it's a carnival ride" ~ ellis paul
paddy
Top

I'm sorry i could not bring Lucy to Paris...

On a side note to Massengill, he just released an album with jack Hardy as The Folk Brothers 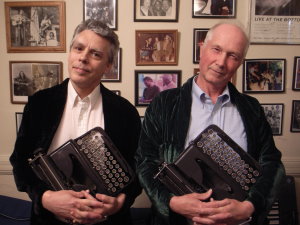 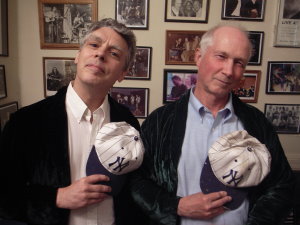 Thanks for the link Herve - just listened to 'My Name Joe' which is a great song - I had put an 's' in the title on Lucy's setlist so I've changed that and corrected it.

The Folk Brothers were at WoodyFest this year, they played an afternoon slot at the Crystal Theatre - it was packed for their performance which was just what you'd expect from two 'folkies' - very laid back and mellow. They created a lovely atmosphere in the theatre. Really enjoyed them.

Any Lucy Kaplansky fans out there? My friend bought a ticket to see Lucy this coming Saturday, April 30, 2011 at Club Passim, Cambridge MA with me, at Table 10 (front row table). Then it turned out her college aged daughter is directing a play, and she can't attend the concert. She would love to sell the ticket ($30) and I'd love to facilitate that, especially since all the good, close-up tables are sold out, and I don't like good seats to be wasted. If anyone is interested, or knows anyone who's interested, please respond here or email me at sarshik@comcast.net Thanks, Carol
Top
Post Reply
11 posts • Page 1 of 1

Return to “Looking for My Friends”

Users browsing this forum: No registered users and 8 guests