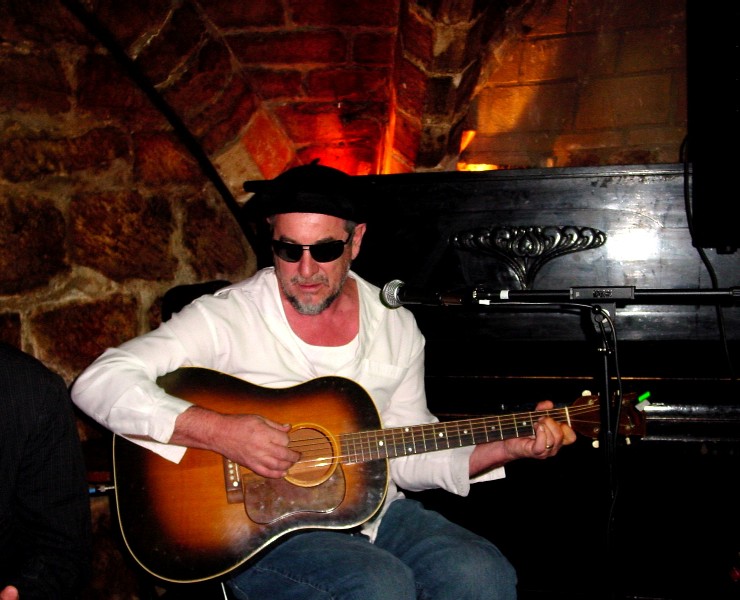 As far as the fashion report is cocnerned (a tradition with these guys...), Greg was wearing what he called a "painter cap" on Tuesday night and a French beret last night, which I offered him on Tuesday. They did wear shades on Wednesday, but not on Tuesday.

I am not really familiar with Greg's huge body of work but i recognized Laughing river, The Poet Game, Whatever it was, Billy from the Hills, Kokomo, and my favorite song, which i had requested, Late Night Radio.

He also sansg a song by Lucinda Williams and closed the second night with "Folsom Prison Blues", in the same way as on the Youtube video.

I did not know what to expect from Greg and Bo on a personal level as I had only been dealing with Greg's manager. I met two very kind men, really happy to play in this tiny club.

Last night was my last "official" show (I'll present one more farewell ghig in July with Eric Andersen and Iain Matthews) and during his set Greg thanked me for bringing artists who do not belong to the mainstream circuit, and it sounded like he was speaking in the name of all the artists who had played at la Pomme d'Eve since I started the series four years ago. This was a very moving moment I'll never forget.

It was great to meet Richard and Jela, and Ed Hoare, all the way from the UK:-)

Sounds like your last "official" show was very satisfying for all. Thanks for the report - it's nice to know the artists appreciate your efforts as much as the audience members.

Glad to hear global ambassadors, Richard and Jela, were there. I like to think they are our EP board representatives.

Maybe we should make EP fashion detail a requirement of show reports.

Yes we were there for the Wednesday show (we had hoped to be there for both but I had to work so we couldn't travel to Paris until the Wednesday - I was in deep, deep trouble with Richard about that - he's only been waiting to see Greg Brown for about 18 years!) However we also saw Greg Brown in Holland on Saturday at Blue Highways so he did get to see him twice after all.

Paris was sold out, seated and standing room packed out and because GB has such a broad catalogue of work the two shows were completely different - the first was very blues influenced and the second, the one we saw, folk/jazz influenced. He has such a wonderful deep voice and his phrasing is quite distinct. We were so pleased to be able to see him in such an intimate venue and especially to be there for Herve's last official show.

We had a great time.

Return to “Looking for My Friends”

Users browsing this forum: No registered users and 8 guests